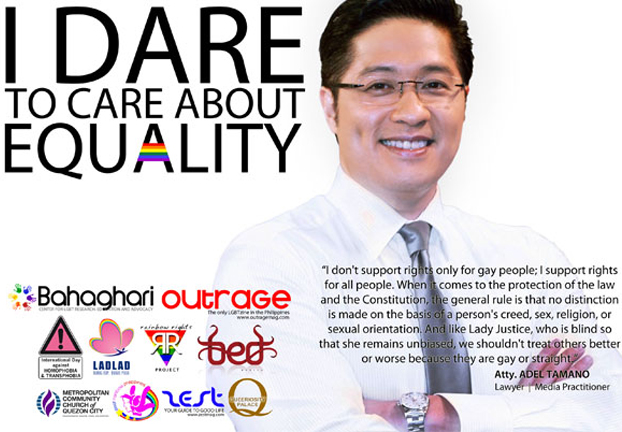 Highlighting his support for equal rights, not special rights, Atty. Adel Tamano has taken part in the “I dare to care about equality”, a photographic campaign spearheaded by the Bahaghari Center for SOGIE Research, Education and Advocacy, Inc. (Bahaghari Center) as a call for everyone to take a more proactive stance in fighting discrimination.

“I don’t support rights for gay people; I support rights for all people. When it comes to the protection of the law and the Constitution, the general rule is that no distinction is made on the basis of a person’s creed, sex, religion, or sexual orientation. And like Lady Justice, who is blind so she remains unbiased, we shouldn’t treat others better or worse because they are gay or straight,” Atty. Tamano said.

Atty. Tamano, one of the anchors of TV station ANC, was the first Filipino Muslim to graduate from Harvard Law School. He is a partner at the law firm of Kapunan Tamano Javier & Associates. He lectures on legal writing at the Ateneo Law School, and on constitutional law at the Far Eastern University Institute of Law and the Pamantasan ng Lungsod ng Maynila.