Call to be ‘manly’ by supporting equality 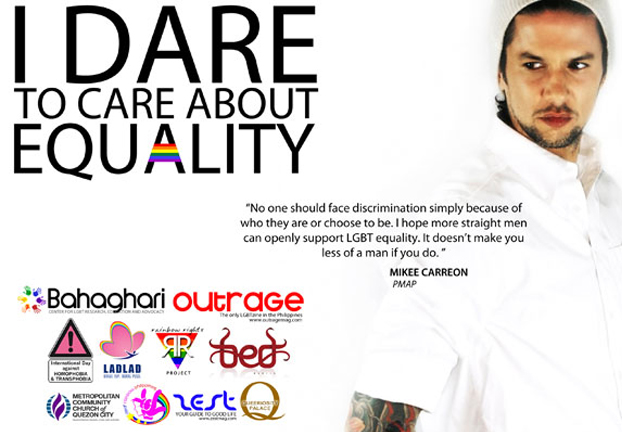 As he expressed his hopes for more straight-identifying men to support LGBT rights, Mikee Carreon of the Professional Models Association of the Philippines (PMAP) took part in the “I dare to care about equality”, a photographic campaign spearheaded by the Bahaghari Center for SOGIE Research, Education and Advocacy, Inc. (Bahaghari Center) as a call for everyone to take a more proactive stance in fighting discrimination.

“No one should face discrimination simply because of who they are or choose to be. I hope more straight men can openly support LGBT equality. It doesn’t make you less of a man if you do,” Carreon said.

Behind the camera are photographers Jed Yumang and Patrick King Pascual, with make-up and styling provided by artists Kaye Candaza and Nicole Magay. “I dare to care about equality” was co-developed by Outrage Magazine, the only LGBTzine in the Philippines, with the support of IDAHO, Ladlad Partylist, Rainbow Rights, Bed Bar, Deaf Rainbow Philippines, Metropolitan Community Church-Quezon City, Zest Magazine, and Queeriosity Palace.