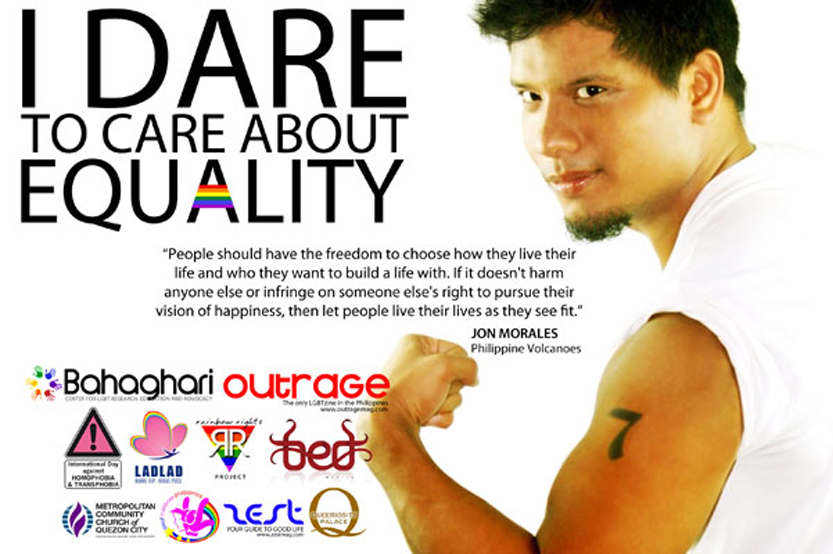 Highlighting the importance of freedom to choose, Jon Morales of the Philippine Volcanoes expressed his support for the push for equality, taking part in the “I dare to care about equality”, a photographic campaign spearheaded by the Bahaghari Center for SOGIE Research, Education and Advocacy, Inc. (Bahaghari Center) as a call for everyone to take a more proactive stance in fighting discrimination.

“People should have the freedom to choose how they live their life and who they want to build a life with. If it doesn’t harm anyone else, or infringe on someone else’s right to pursue their vision of happiness, then let people live their lives as they see fit,” Morales said.

Behind the camera are photographers Jed Yumang and Patrick King Pascual, with make-up and styling provided by artists Kaye Candaza and Nicole Magay. “I dare to care about equality” was co-developed by Outrage Magazine, the only LGBTzine in the Philippines, with the support of IDAHO, Ladlad Partylist, Rainbow Rights, Bed Bar, Deaf rainbow Philippines, Metropolitan Community Church-Quezon City, Zest Magazine, and Queeriosity Palace.

Call to be ‘manly’ by supporting equality

Rep. Teddy Casiño says now is the time for equality