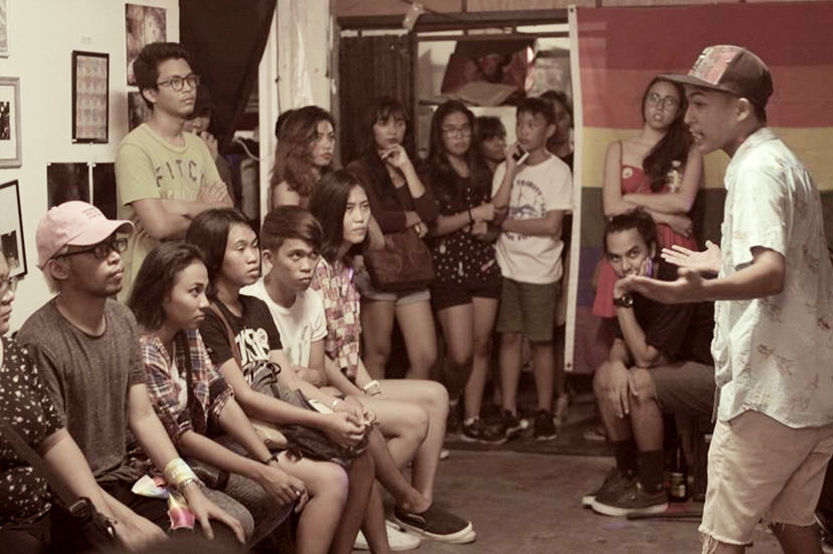 To “elevate the discussion about LGBTQIA Pride”, QZN Bahaghari and Guni-Guri Collective are hosting the 2018 iteration of “Kasarisarian” a cultural event, from July 21 to 26 at the ESPASYO ART GALLERY, Quezon Avenue corner Trinidad Street, Lucena City in the Quezon Province.

Particularly for this year’s event, “we’re trying to elevate the discussion and the perspective on the current situation of the LGBTQIA people in the country,” said Aaron Bonette, co-organizer of the event. “We want to make Kasarisarian 2 a non-hierarchal exhibition invested in grassroots community organizing, and focused on radical queer narratives, visioning and politics. This means that the curated works will tackle and represent queer lives and struggles based on the current and past experiences of LGBTQIA people that are skeptic – from the looming commercialized cooptation of Pride to the glitter industrial complex to the failed political myth of equality through law, violence against LGBTQIA people and class hierarchy.”

Bonette added that the annual Pride month celebration has just ended, and yet – over 20 years since the first such gathering in Metro Manila “the LGBTQIA movement does and spends more on branding rather than coalition building, with the mainstream LGBTQIA movement focusing on soliciting funds from corporation to run our cause; it’s almost like our rights have been bought, paid for and sold to the highest bidder no matter how anti-worker or neoliberal policy upholder that corporation is.”

In this sense, “the metaphor of being ‘treated like a piece of meat’ is valid, as if our bodies and identities are there to be exploited in the free market of commodification and oppression.”

Bonette said that they are cognizant that “corporate money also do some good for the community”, but that awareness is needed so LGBTQIA people also recognize that “there is something antithetical about a movement for equality and justice funded by the forces in the world that is also most responsible for widespread economic and social inequality.”

In the end, “we’d like to use this event as a venue to ask LGBTQIA people: What’s the future ahead of us? When our community is not yet united as a social movement that addresses the issues facing the most marginalized LGBTQIA people, with those fighting against systemic poverty, are we really making any progress? Or has the LGBTQIA movement, our movement, already hijacked by power elites advocating for their own interests?”

“Kasarisarian” is a term coined from: “Kasarian” which means gender, and (2) “Sari-Sari” for variety and diversity. It aims to provide queer (and straight) artists a non-commercial and an uncompromising space to tackle and explore various queer narratives, identities and politics.

This is a free event (yes, there’s no admission fee); though it is open for donations (during the event). Door will open at 1:00PM on July 21 and the program will start at exactly 6:00PM with a welcome reception, followed by the Artist Talk, film screening and cultural performances. This will run until July 26.

For more information, head to Guni-Guri Collective; or contact Aaron Bonette at aarnmssbntt@gmail.com or 0995-085-3664.