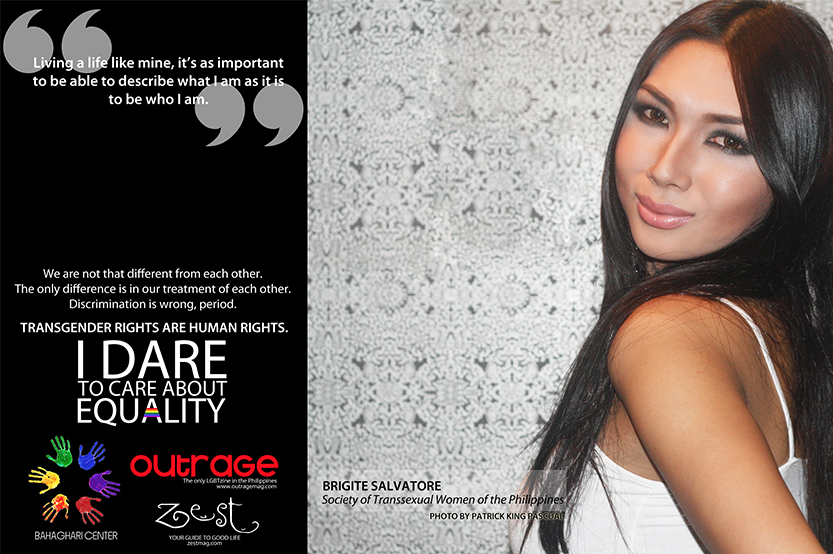 In a move eyed to at least help highlight the transgender (TG) community in the Philippines, Bahaghari Center for SOGIE Research, Education and Advocacy (Bahaghari Center) has announced a photographic campaign, “No different”, slated for the Transgender Day of Remembrance 2012.

TDoR is held every November 20, which the world – particularly the lesbian, gay, bisexual and transgender (LGBT) community – marks to bring attention to the continued violence endured by the TG community; as well as to memorialize those who have been killed as a result of transphobia, or the hatred or fear of transgender and gender non-conforming people. Founded in 1998 by Gwendolyn Ann Smith, a transgender graphic designer, columnist, and activist, to memorialize the murder of Rita Hester in Allston, Massachusetts, the TDoR has evolved from the web-based project when it was started, into an international day of action observed in over 185 cities throughout more than 20 countries.

“Truly, it is easier to hate us when you don’t see us; when you think you don’t know us. We continue to be cast as ‘others’, so that the discrimination we experience are given justification; this is, at least, the excuse of those who keep claiming that we want ‘special rights’, even if we’re only after equal rights,” said Michael David C. Tan, Bahaghari Center executive director and publishing editor of Outrage Magazine, the only LGBTQI publication in the Philippines, a partner of the campaign. “We need to confront this imposition of ‘other-ness’. LGBTs are everyday people – medical practitioners, policemen, firemen, lawyers, priests, fathers, mothers, sons, daughters, politicians, scientists, educators, actors…”

The “other-ness”, said Tan, is even more defined in the treatment of TGs. Simply for being who they are, TGs are refused jobs, expelled from schools, barred from establishments, physically/sexually/mentally abused, and – in worst cases – are at risk to be slain, said Tan. “There are instances when TGs are ridiculed even by other members of the LGBT community”, added Tan, who noted the significance of observing TDOR since “TG-related hatred remains pervasive.”

Added Patrick King Pascual, who – with Deaf transgender rights advocate Disney Aguila – co-coordinates the campaign: “Fear-mongering against members of our community that highlight our supposed (and ill-conceived) ‘oddities’ is erroneous.”

Segregated data on TG-related hate crimes remain hard to come by, even if LGBT-related hate crimes, as a whole, have been rising. In the US, as reported by the Federal Bureau of Investigation under The Hate Crimes Statistics Act of 1990, for instance, reported LGBT hate-related crimes reached 1,617 in 2008 alone – and the number actually grew from the 1,171 reported LGBT hate-related crimes in 2005. Meanwhile, in the Philippines, data from Pink Watch, an LGBT hate crime watch, cited over 140 such cases since 1984, when the first case was noted.

A photoshoot is slated on November 10, from 12.00PM to 5.00PM at Victoria Court, Pasig. TG Filipinos are invited to join.

This effort is part of the earlier “I dare to care about equality”, a photographic campaign calling for everyone to take a more proactive stance in fighting discrimination done by Bahaghari Center as part of the International Day Against Homophobia and Transphobia (IDAHO), celebrated every May 17.

The outputs of the campaign are to be released come November 20.