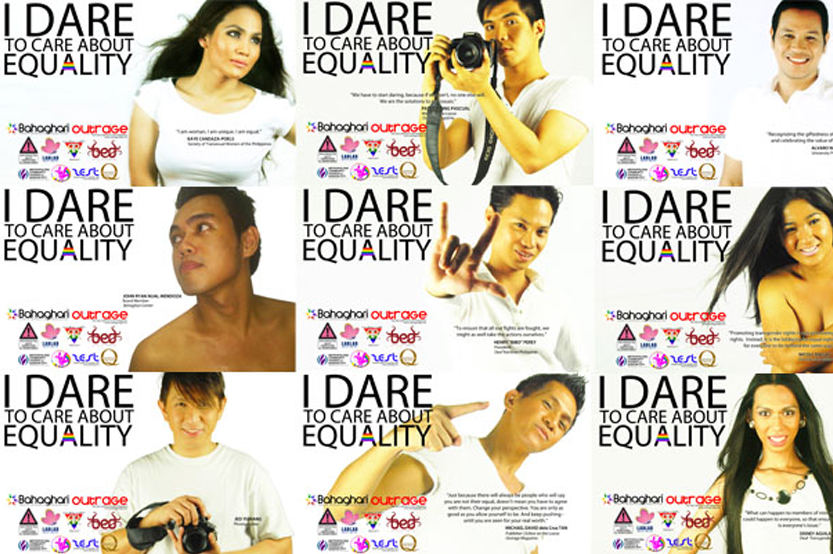 Stressing how the promotion of equality is everyone’s issue, Bahaghari Center for SOGIE Research, Education and Advocacy (Bahaghari Center) has launched the “I dare to care about equality” campaign, forming part of the localized efforts aligned with the annual International Day Against Homophobia and Transphobia (IDAHO) celebrations.

Celebrated every May 17 since 2004, when it was founded by Louis-Georges Tin, IDAHO is an effort to coordinate international events to call for respect for lesbians and gays worldwide. May 17 was chosen as the date of the event because homosexuality was removed from the International Classification of Diseases of the World Health Organization (WHO) on May 17, 1990.

By 2006, IDAHO – and its call not just for decriminalization of homosexuality but also the uplifting of the status of gays and lesbians all over the world – has gained wide support, including several Nobel Prize winners (Desmond Tutu, Amartya Sen, Elfriede Jelinek, Dario Fo, José Saramago), artists (Merryl Streep, Cindy Lauper, Elton John, David Bowie), intellectuals (Noam Chomsky, Judith Butler, Bernard-Henri Lévy), non-government organizations (ILGA, FIDH), politicians, and many others. Globally, thousands of people from various communities (LGBT, as well as our allies) organize LGBT-related events from as far as Congo, China and Bulgaria.

In the Philippines, as part of IDAHO, localized campaigns were made by Outrage Magazine, among others, since 2009. The Webzine is also a partner of this year’s campaign.

For IDAHO 2012, the Bahaghari Center’s “I dare to care about equality” is a photographic campaign calling for everyone to take a more proactive stance in fighting discrimination. Photoshoots will be held for people who believe in advocating equal rights for all, with the outputs of the campaign to be released come May 17 online, as postcards/fliers, and as online ads.

“That we need to think globally, but should act locally has long become a cliché,” says Patrick King Pascual, coordinator for the campaign. “It remains just as valid, all the same. With ‘I dare to care about equality’, therefore, we aim to provide a channel for people to express their support for the continuous push for equality for all, just as we also provide a channel for people to know who are pro-equality.”

The photoshoots will be helmed by photographer Jed Yumang who will be behind the camera, with make-up and styling provided by artists Kaye Candaza and Nicole Magay.

For those interested to participate, email Patrick.King.Pascual@outragemag.com. For those unable to join the photoshoots, participation is still encouraged through the submission of photographs following the campaign’s format for these to be included in ‘I dare to care about equality’.

“Moves like this are important in highlighting that there are steps we can take to help increase the awareness on the quest for equality of LGBTs,” Pascual says. “It is up to us to keep on pushing until that day when anybody’s sexual orientation and/or gender identity are no longer issues.”

Related Topics:International Day Against Homophobia and TransphobiaLGBTLGBT Philippines
Up Next

Rep. Teddy Casiño says now is the time for equality